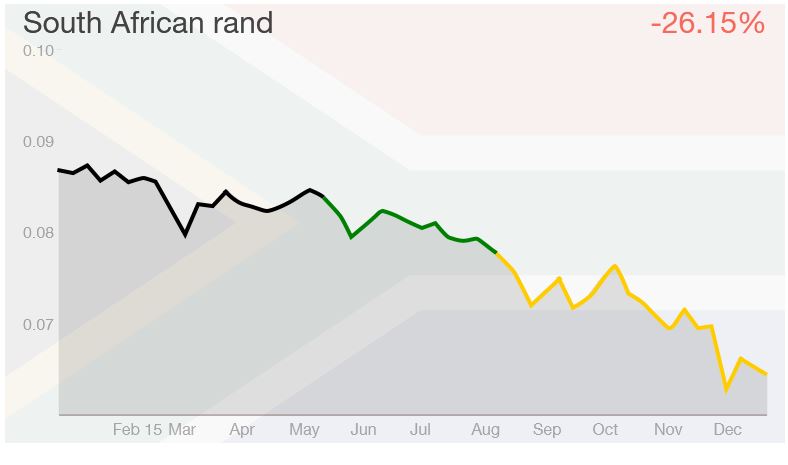 Currency exchange rate fluctuation can have a big impact on the expat life, especially if we take in consideration that the South African Rand was one of the world’s worst-performing currencies in 2015 after dropping more than 26% and continued to slide another 15% in the first trading days of the new year. The Pound has gained in value not just against the South African Rand, but against all other currencies of resource-exporting nations due to lower commodity prices, subdued global growth and China economic slowdown.

During 2015, the Pound increased in value against most of its counterparts apart from the US Dollar which is trading against a 7-year low. Commodity currencies such as the South African Rand have been among the worst performers against the British Pound as the UK economy continued to outperform in the past year. A stronger British Pound is good for expat spenders as it gives you more spending power overseas. For expats, the combination of a strong British Pound and a weaker South African Rand it is, even more, compelling.

The question for expats is if current exchange rates for both the British Pound and South African Rand are sustainable at current levels or not. In the short to medium-term, Brexit remains one of the biggest downside risks for the British Pound as based on the latest polls a growing majority of the UK population will vote in favor of leaving the European Union. However, the prospects for the British Pound are encouraging as BOE (the Bank of England) based on historical standards is set to raise the interest rates right after the US starts the tightening process which can boost the British Pound.

On the other hand, the political uncertainties are certainly weighing on the currency exchange rates as South Africa’s President Jacob Zumba has changed no more than three Finance Ministers in the last few weeks. South Africa’s economy has been facing many challenges and the aggressive Rand devaluation has added a new dimension to the current economic issues. The market consensus is for the South Africa’s economy to contract for the third consecutive year with an estimated annual growth rate less than 1%.

China’s decision to devalue the Yuan is likely to deepen a round of competitive devaluation, also known as currency wars, around the world. Through weakening its currency China seeks to gain an advantage over its competitors in a world of slow global growth this can make a big difference. China is also trying to move from and export-led growth model towards a consumption-driven model which will cause its trade Balance to contract. China is South Africa’s largest trading partner and the macroeconomic shifts in China are already having a negative impact on the trade between the two countries. According to China’s customs office, South Africa exports to China have fallen by almost 40% in 2015.

South Africa’s exports are also set to take a big hit if the AGOA (African Growth Opportunity Act) gets suspended after March 2016. Even though South Africa has reached a temporary agreement the US President Barak Obama issued an executive order which will remove the benefits of duty-free access of South Africa agricultural exports. Under the AGOA act, South Africa exported about $154 million of agricultural products last year alone.

Although the Rand had been weakening steadily the risk is still to the downside and there is no sight of this downside pressure to end anytime soon while the British Pound although in the short-term can experience a sell-off due to the risks associated with Brexit, in the long-term the Pound will outperform nay of its counterparts.